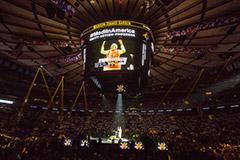 “They used to think of us as snake charmers!” boomed Narendra Modi, shortly after receiving an electrifying welcome at New York City’s Madison Square Garden this Sunday. “Now they know we play with mice, not snakes,” he said, in a well-received reference to India’s booming IT industry.

In his engaging, punchy style, the Indian prime minister wowed the estimated 19,000 supporters, mostly Indian-Americans, who had poured into Manhattan to see the man they affectionately call ‘NaMo.’

Until recently, an event of this kind would have been unthinkable. Modi was banned from entering the United States because of his suspected involvement in the 2002 Gujarat riots. Passersby were reminded of this by protesters carrying posters reading “Wanted: Narendra Modi for Crimes Against Humanity.” Still, his days of being a persona non grata seem behind him now.

The atmosphere was reminiscent of the Obama fever of 2008. The iconography bore an uncanny similarity — official merchandise at the event depicted Modi in the same style as Obama’s “Hope” and “Change” campaign posters. During one part of the speech, one excited audience member even shouted, “Yes, we can!” after Modi called upon his nation to clean up the Ganges River.

But, any favorable comparison to Obama’s glory days also serves as a warning: even the most celebrated politicians can see their popularity plummet if they do not deliver.

Modi, who won in a historic landslide this May, ran on a platform of economic development and growth. Expectations are still soaring. His supporters believe the right-wing Hindu politician can deliver the economic growth seen in Gujarat — the economically thriving state where he served as chief minister for over a decade — to the rest of the country.

To do so, he will need the help of foreign investors, crucial to jump-start India’s flagging economy. According to some estimates, India will need $1 trillion in investments over the next 10 years to fix its creaking infrastructure. Modi, who will be meeting with Google’s Eric Schmidt, Goldman Sachs’ Lloyd Blankfein, and others, has high hopes that these cash-rich chief executives will open their wallets for him.

When Modi was chief minister in Gujarat, he had great success in courting India’s largest companies. Modi rolled out the red carpet for businesses, cut red-tape, improved infrastructure and offered lucrative incentives. With this, Modi won their unconditional support.

Anil Ambani, the billionaire chairman of Reliance Group, a leading Indian conglomerate, hailed Modi as a “lord of men, a leader among leaders, a king among kings.”

But Modi may have to wait a long time before he receives this level of praise abroad.

Many foreign investors have been disappointed by Modi so far. A global trade deal was scrapped in August; caps on foreign direct investment, if lower, remain in place and long-awaited cuts to subsidies — which eat away at India’s budget — have been postponed.

The budget, seen as a big indicator of the new economic direction of the country, failed to impress observers. “Nothing that was announced today marks this government out as being significantly different from the last,” said Mark Williams, a chief Asia economist at Capital Economics, as he talked about the budget in July. He added, “If market enthusiasm for Mr. Modi’s government is to be sustained, that will have to change.”

Chris Moore, senior director of the National Association of Manufacturers, recently complained that Modi and his administration say “positive things…but their actions tell a different story.”

Dilip Patel, 38, who travelled in from New Jersey for Modi’s speech at Madison Square Garden, dismissed these concerns. “He has only been a PM for 100 days,” Patel said as he left the event. “If I had to rate him, I would give him top marks. He gets to the office early. He never takes vacation. He even makes sure the bureaucrats come to the office on time. So far, it’s good.”

Right now, there is a huge amount of good will in Modi’s account, deposited by people like Patel and millions like him who support the prime minister. Just getting into work early can win him praise.

Like Obama’s supporters in 2008, they are desperate for change after years of corruption, dynastic politics, and poor governance.

But, foreign investors care little for symbolic change and the feel-good factor. They are waiting to see concrete changes before giving money and support.

And if those changes aren’t made, Modi could end up less popular than Obama is now.