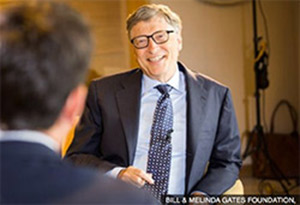 The world’s richest man is visiting the world’s most cash-strapped nation.

And when I met Bill Gates in the presidential suite of one of Delhi’s many grand hotels, he was full of praise for the Indian prime minister’s decision to scrap 86% of the country’s currency.

“The bold move to demonetise high value denominations… is an important step to move away from a shadow economy to an even more transparent economy,” Mr Gates said in an address to Prime Minister Narendra Modi and his cabinet colleagues on Wednesday.

He was keen to tell me why. Perhaps not surprisingly, the Microsoft founder sees technology as key.

He believes India is on the verge of a digital financial revolution that goes well beyond the online payments and plastic cards that most banks already offer their customers.

He is looking forward to the entry of players such as mobile phone companies and others into the consumer finance market – something the Modi government has said it is poised to authorise.

These services use software first developed in Africa to transform your mobile phone into a kind of digital bank branch, allowing you to pay for goods and services, transfer money and even get loans at the push of key.

Mr Gates believes that the pull of these services, together with the push of demonetisation, will cause Indians to stampede into what he calls the “digital realm”.

“All of the pieces are coming together,” he told the Indian prime minister. “I think in the next several years India will become the most digitised economy, not just by size but by percentage as well.”