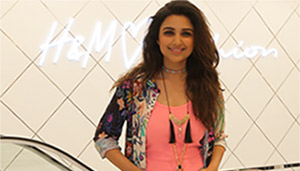 The Swedish retail giant roped in the presence of bollywood’s sweetheart Parineeti Chopra to pull the millennial crowd toward its biggest store yet.

The retailer who has a presence in 61 countries opened its first Indian store in Saket, Delhi last year followed by another in DLF Ambience Mall, Vasant Kunj, Bangalore and now Noida.

Over 500 fashion lovers queued up early in the morning to be the first to shop the latest collections and celebrate the grand opening with the Ishaqzaade actress. But it was the first 10 fashionistas in line who got lucky with H&M gift cards worth Rs. 4000 which were handed out by the actress herself.

Dressed in denim shorts, a pink tank top and a multi-coloured open-front longline kimono, Parineeti was every bit the ambassador of affordable fashion that H&M stands for.

“The opening of H&M’s 4,000th store at DLF Mall of India was incredibly fun! I’ve always liked H&M’s exciting and affordable fashion- there is plenty of inspiration in store to create your personal style.” said Parineeti Chopra.

Spread over 37,000 sq. ft, it is H&M’s biggest store yet. It has 4 floors, with each floor dedicated to apparel and accessories for ladies, men, teenagers and children respectively. The flagship also features sections for lingerie, H&M Sport, H&M Mama for expecting mothers and a plus size collection, H&M+.