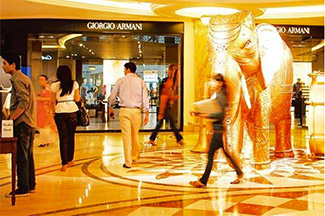 New Delhi: The super rich in India now prefer to shop at home rather than in Dubai, Singapore or Europe, says a Top of the Pyramid report by Kotak Wealth Management, released on Tuesday.

The report, based on a survey carried out by the wealth manager between January and March, showed that almost six out of 10 ultra high net-worth individuals (HNIs), or people who have a family wealth of over Rs.25 crore or annual income of at least Rs.3 crore, shop locally with more international brands opening stores here. Jewellery and apparel are their top spends, followed by holidays.

The report said the combined wealth of India’s ultra high net-worth households is set to increase almost two-and-a-half times to Rs.319 trillion by fiscal 2021, driven by addition of new members from emerging sectors and new avenues for investment that give higher returns. This has prompted luxury brands to start expanding in India.

“The number of luxury brands and stores has gone up in the last 2-3 years. When (the) ultra rich shop, they are also looking for experience. Earlier, the environment in India was not conducive for them. Now that has changed, allowing them to spend more time on other activities when they are abroad than spending time on shopping,” said Harminder Sahni, founder at Wazir Advisors, a consultancy.

The trend of shopping more at home can also be attributed to the fact that 64% of ultra HNIs are impulsive buyers of apparel and accessories. “Spends on the discretionary fashion portfolio are increasing for both men and women. They are shopping a lot more. If you go to any of the malls such as the Emporio mall in Delhi on the weekend, you see so many high-end cars coming in. These people are not just visiting the food courts. Also, even if they have shopped abroad and they like something in the store here they will go ahead and buy,” said Darshan Mehta, chief executive officer at Reliance Brands, which retails luxury and premium brands such as Ermenegildo Zegna, Brooks Brothers and Pink.

With more luxury brands entering India, the prices have also come down. Earlier luxury products available in India were as much as 40% more expensive compared to prices overseas. That difference has now come down to “about 10-12%, which is not much. Moreover, in some countries such as Italy, consumers have to give passport details for bills above €1,000. So they may not like doing that,” said Mehta.

Also, with increased use of technology and innovation, a new spending segment has emerged for the ultra rich: wearables. The report said 57% of ultra HNIs use wearable devices.

“The age of the ultra HNI is going down and many are below the age of 50 and open to smart gadgets and wearables. Earlier, this category didn’t exist. They also see the benefit of using gadgets for their daily needs,” said Murali Balaraman, partner-advisory services at EY, the consulting firm formerly known as Ernst and Young.

The survey also showed a shift away from equities in ultra HNIs’ investment portfolios, mainly due to the near-20% fall in Indian equities between February 2015 and March 2016, with the benchmark BSE Sensex going from 29,380.73 to 22,951.83 points.

The realignment in the investment portfolios of ultra HNIs saw a rise in allocations to three asset classes: real estate, debt and alternative assets. In the debt market, tax-free bond issuances by public sector undertakings elicited a positive response from ultra HNI investors, the report added.

The total worth of ultra high net-worth households increased by 5.5% from a year ago to Rs.135 trillion in fiscal 2016, the slowest growth since the survey was launched in financial year 2011. The ultra HNI population grew 7% to 146,600.